The next stop on our Kenyan safari is Masai Mara National Reserve, a 583 square-mile reserve in southwestern Kenya adjacent to the Serengeti in northern Tanzania. The terrain is primarily open grassland, “spotted” with bushes, animals, and acacia trees. All members of the “Big Five” (lion, leopard, elephant, cape buffalo, and black rhinoceros) are found in the Masai Mara. However, we witnessed only four of the five here – lion, leopard, elephant, and cape buffalo. The black rhinoceros population is very small, and we did not see any.

Masai Mara National Reserve was by far our favorite stop during our Kenyan safari. The large expanse of land and diversity of wildlife were simply amazing as the photos below will express. We did three game drives in the reserve, one the afternoon of our arrival, an all-day drive to the river and back (our hotel, the Masai Mara Sopa Lodge, even provided us with a boxed lunch!), and a morning drive on the way to the Keekorok Airstrip for our flight to Nairobi. 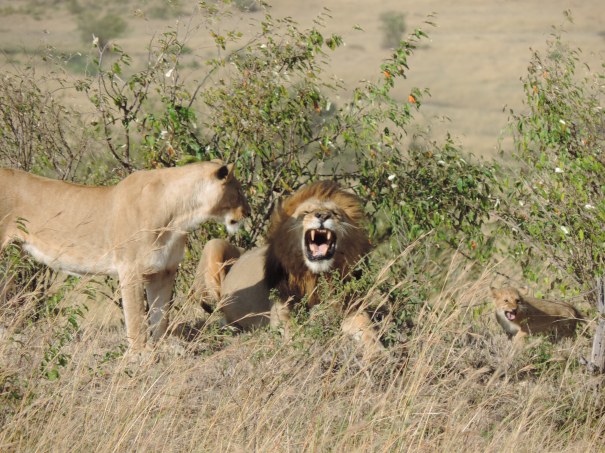 Lions Greeting One Another

The above photo is one of my favorites! Andrew, our guide told us lions greet one another when they approach with a roar. The lioness and lion had just greeted each other before this photo was snapped. I was lucky enough to catch the moment the lion and cub roared. What a great shot! Other highlights are below.

Hippos in the River

I call this final photo the “Circle of Life.” This lioness is the final one to clean up the remains of a wildebeest after the “kill” on the previous night. Her sleeping pride is nearby. This activity obviously has attracted a lot of other safari vehicles. Although we all are very close to the lioness, she has learned that the vehicles are no threat to her, so she finished her meal and then strolled away to join her pride for a nap. 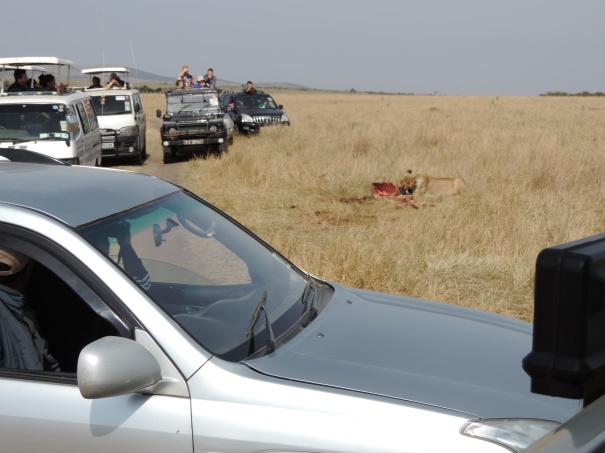 “Circle of Life”-Lioness Dining on Wildebeest

My wife Linda manages Antietam Travel Service in Frederick, Maryland, and I maintain the website http://www.antietamtravel.com and our Wordpress blog.